Food is without question an integral part of school life. The rhythms of the school day are shaped by eating whether it be in breakfast clubs, at recess, during ‘brain food’ breaks or eating lunch. Given this, it is unsurprising that schools invest time managing children’s food-related behaviour through a myriad of rules about what, when and how to eat. However, our research found that, at times, these rules were ad hoc and contradictory. Many children were also subject to lunch box inspections. These inspections were conducted either by teachers or fellow students. We heard stories about how ‘good’ lunch boxes were rewarded and ‘bad’ lunch boxes were punished.

One of the most pervasive food programs our participants talked about was Nude Food. Throughout our conversations it emerged that this program is characterised by many contradictions. Nude Food encourages the eating of non-processed foods and a reduction of waste. Yet, we discovered that schools implement Nude Food in ad hoc ways. Teachers also used rewards and punishments—some talked about being rewarded with hot chips, lollies and laminated certificates. Punishments included having names written up on the board or having to pick up rubbish. Lunch box inspections and the associated rewards/punishments were not just a feature of Nude Food, though. They were something that schools just did.

Our research was also interested in hearing about what children were learning about food at school. We discovered that formal lessons about food were sporadic, and children found them unmemorable. In a single school, children may have experienced several different programs, initiatives and lessons about food. Each differed in focus and purpose. The messages children received about food were far from clear and parents identified food information as contradictory or partial. We also observed a disconnect between the ways that families and schools ‘do food’. So, we were left with a question: can we develop approaches to food that are nourishing and that transcend the punitive? 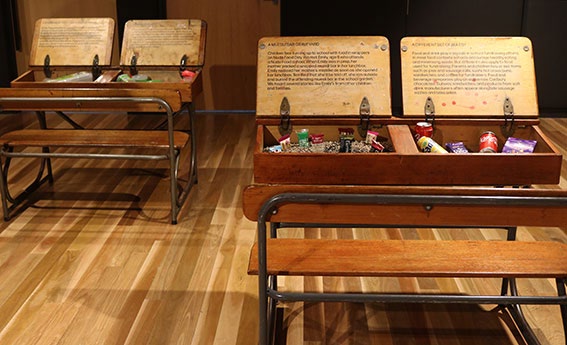 Parents said they found Nude Food lunch boxes useful, with their tiny compartments and containers convenient for ‘brain food’ and snacks. But parents also described the tireless ‘hunt’ for many lost small containers and lids. When components go missing, parents have to replace whole lunch boxes. Nude Food Day sparked anxiety in some parents, spurring trips to school lost property and last minute runs to the grocery store, tearing packaging off at home before packing food into containers in order to meet the Nude Food standards.

A DIFFERENT SET OF RULES?

Whilst families were subject to one set of rules about what food they could pack for school, there seemed to be a different set of rules for many schools when it came to fundraising efforts. Parents and children buy or sell items such as pies and sausage rolls, hot cross buns, sandwiches, and coffee for fundraisers. Food and beverage companies also play an active role. Cadbury chocolates, Subway sandwiches, and products from soft drink manufacturers often appear alongside sausage sizzles and bake sales. Some families talked about school efforts to raise money via the sale of healthier foods but overall it seemed that a different set of rules apply to food at school when funds are sought.

Some children and parents described the fear of turning up to school with food in wrappers when it was Nude Food Day. During our interviews, we met six year old Emily who attends a Nude Food school. When Emily was in prep, her mother packed a wrapped muesli bar in her lunch box. Emily realised her mother’s mistake as soon as she opened her lunch. Terrified that she would be told off, she ran outside and buried the offending muesli bar in the school garden. We heard several stories like Emily’s from other children and families.

Children and families told us about the many lunchtime and food rules at their schools. Rules vary across schools but can differ within a single school. Children must be adaptable, they know the rules can change from class to class, year to year, school to school. These rules reveal school attempts to regulate food consumption. But rules educate as well as regulate. What lessons about food do we want children to learn?

THE MANY WAYS SCHOOLS ‘DO FOOD’

This infographic visualises the different ways participants talked about how food was addressed in their primary school.

We found that Nude Food, Life Education, and Garden and Cooking programs were prevalent across schools. We also discovered that program offerings and messages vary both across schools, and within schools. This, of course, is to be expected. However, the contradictory messages that emerged as a result of the different programs delivered within schools was not expected. Despite our many discussions about food programs, families reported an overall lack of ongoing formal nutrition or food education.

Families talked about other food events and activities that were an integral part of their school day. Schools hosted themed days that encouraged them to celebrate food from ‘other cultures’. Many schools permitted birthday celebrations, while others didn’t. In schools where birthdays were celebrated, children could bring a variety of foods depending on the individual school or classroom rules. Some schools, for example, allowed cakes; others celebrated with hummus and carrot sticks, while elsewhere it was sushi. At schools where food was not permitted for birthday celebrations, families talked about being allowed to take stationery items as gifts instead of cakes or other celebratory food.

The many differences across programs and the inconsistencies in school guidelines, policies and practices served to confuse children and parents. Many families we spoke to expressed uncertainty about which guidelines to follow and indicated that they were perplexed at the obvious contradictions in approaches to managing food at schools.

Other food events and activities are an integral part of the school day. Families talked about themed days that encouraged them to celebrate food from ‘other cultures’. Many schools permit birthday celebrations while others don’t. In schools where birthdays were celebrated children could bring a variety of foods. Where birthday celebrations couldn’t include food, students could bring stationery. Differences in programs and inconsistencies in school guidelines, policies and practices confused children and parents. Many families we spoke to expressed uncertainty about which guidelines to follow.